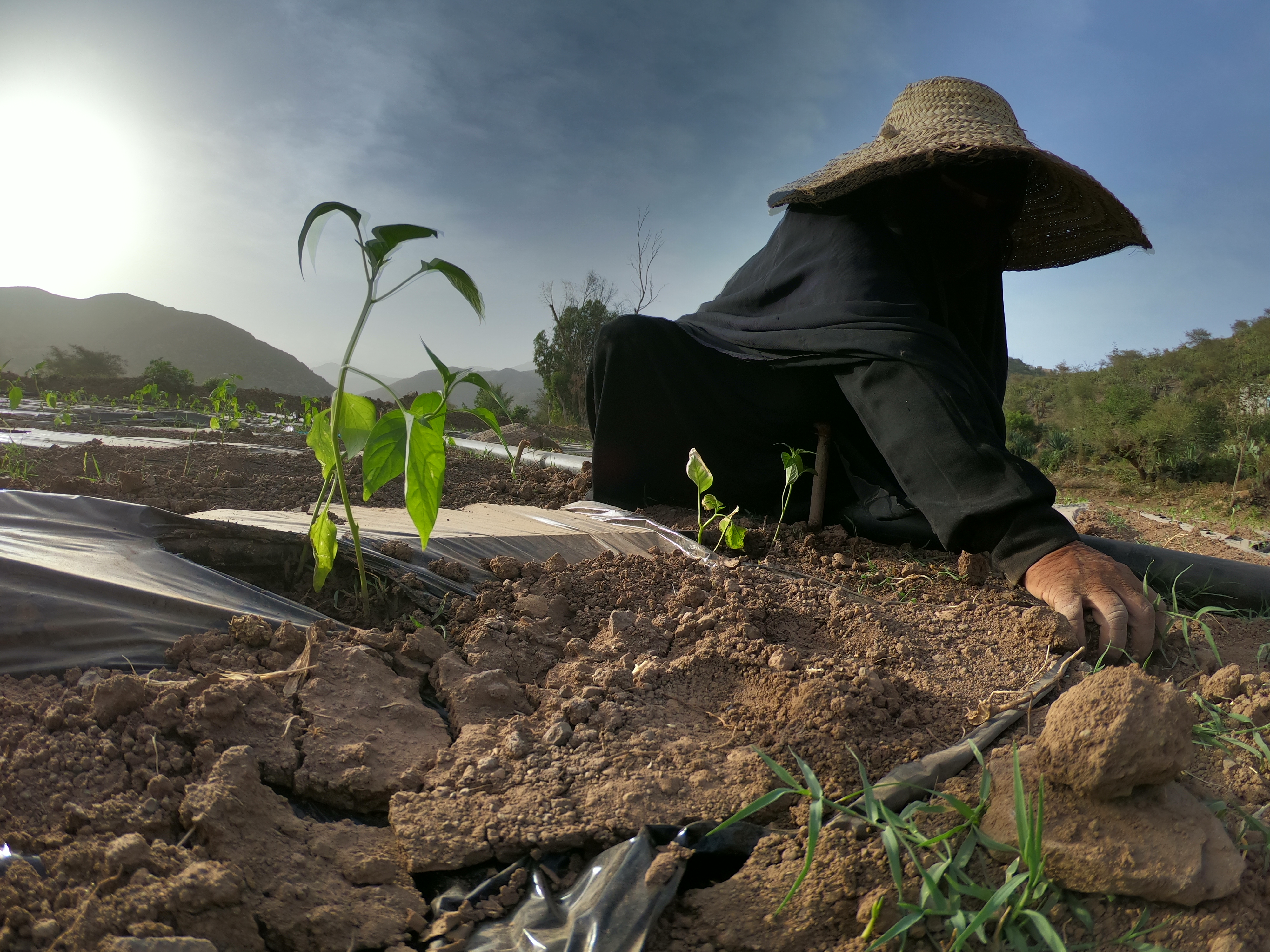 Despite the Yemen conflict, systemic market change is occurring in support of Yemeni farmers resulting in the creation of so far twenty-seven thousand rural jobs. It is local driven, supported by the World Bank and UNDP’s $12.45 million SME component of the $300 million Emergency Project where local innovators have been able to exploit the Yemen crisis to push through a grass roots led change. Farmers supported by a resilience grant are changing moving away from flood irrigation to using drip irrigation systems. Agri-traders in efforts to attract farmer business are expanding creating jobs.

Refreshing developments given the obstinacy of rural Yemen to change. Persistent market failures from well before the current crisis have seen small holder farmers disenfranchised having to travel to major urban centres to purchase agricultural inputs. Limited financial services have narrowed down the investment options available to farmers inhibiting diversification and growth. Severe water challenges were addressed by generous and consecutive handouts of drip irrigation systems that refused to catch-on. The conflict has seen fuel price hikes hit farmers hard. Travelling to cities to purchase inputs today costs a lot more, and when farmers arrive at the city markets, the 125% depreciation of the Yemeni Rial has resulted in price surges at alarming rates for imported agricultural inputs including seeds. The rationing of diesel to help irrigate farms has hit production and farmer revenues.   A real headache, yet all the more reason for farmers to change their behavior and the Social Fund for Development’s Small Micro Enterprise Promotion Service (SMEPS) is at hand to advance change in an effort to get markets working better for small farmers by exploiting ‘critical junctures’ as termed by the economists Daron Acemoglu and James Robinson[1] and brilliantly applied to development and change by Duncan Green[2].

SMEPS is changing market systems at three levels. The first is the core market made up of demand and supply. At the second level SMEPS strengthens market supporting functions such as distribution, knowledge and credit. Thirdly, market rules are addressed. Conflict as a critical juncture is accelerating change at all three levels and SMEPS it at hand to make sure the change works better for the poor.

To illustrate, at the core market level SMEPS has stimulated demand through the provision of the World Bank’s $1500 grant to support small farmers purchase inputs including drip irrigation systems, seeds and seedlings. These were not purchased by the project on behalf of farmers through a tender as would traditionally be the case. Rather, to boost local demand in a manner that supports crowding-in and empowers farmers, the project has trained growers on simple shopping practices so that they can make the purchase themselves. They have been provided.

with an agronomist to support produce a simple farm business plan as well as to help them analyze retail quotations. As a result, hundreds of agri-input businesses across the country are responding to farmers’ request for quotations. To attract farmer business, firms are now offering up a full season of credit, they compete to serve farmers opening branches in rural Yemen, and they are attempting to differentiate bringing in a host of new products and services. Demand and supply relationships have been revitalized and farmers are empowered through increased choice. Farmers choose the supplier, the price, the technology and the quality. Beyond stimulating the core market, SMEPS strengthening of supporting functions is planting the seeds for wide scale replication. 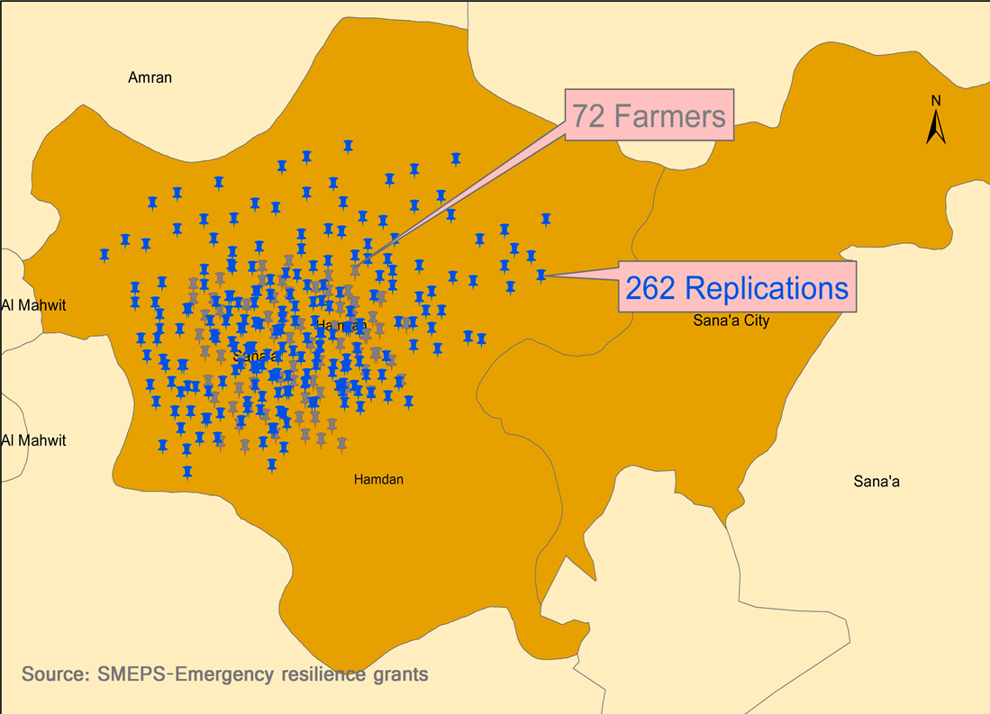 Just half-way into the project for every farmer receiving assistance almost four are replicating allowing for considerable impact at scale. The drive for this change beyond the crisis are more proactive supporting functions. The State’s inability to pay civil servants salaries has resulted in a pool of available skilled labour now being recruited by the private sector facilitated by the project. Agronomist now working for the private sector are helping firms develop aftersales services including the installation and maintenance of drip irrigation systems whose cost is embedded in the price. Newly recruited marketers have helped businesses move from a passive sales mode to an active seller of farming solutions. Micro Finance institutions are now developing rural finance products to help bridge the demand. As the project expands to new districts, wholesalers grow their distribution network to encompass the new areas supporting the sales function. To attract farmer attention, and to win over a share of the $1500 grant, retailers are offering promotions distributing free samples. Some retailers are setting up commercially financed demonstration plots in partnership with farmer communities. At the time of writing this blog a distributor is offering a promotion of 55000 hybrid tomato, pepper and melon seedlings to the project target farmers. Change is happening, and at the root of it is farmer empowerment where the rules of the game are more equitable.

Markets and their supporting functions do not happen in isolation they are subject to a business environment including laws, regulations, standards, social rules and behaviours that influence when, where and how exchanges take place. Small tweaks in the environment can make or break markets. To illustrate, since the onset of the Yemen conflict, agri-traders and financial institutions finding themselves without adequate protection turned-off the credit tap which resulted in a drying up of investments in the agricultural sector leaving farmers and traders in a state of crisis limbo.  Overcoming this, the project avoiding policy deliberations is attempting to build market rules at community levels that protect farmers and traders a like. The project in each target district establishes Community Committees (CC) whose role includes identifying farmers in need of assistance, and support in laying out the rules of engagement. Community Committees are able to reassure traders that their credit lines to known farmers will be honoured – peer pressure goes a long way. Importantly, the CCs help the project reach out to women farmers where salient values and attitudes have seen women farmers bypassed, now more women farmers are receiving assistance. A vacuum in state sponsored rules have permitted the advancement of locally agreed rules that have significantly encouraged grassroots ownership which may in part explain the good replication figures.

Critical junctures produce chaos but they also produce opportunities for change. However, to seize these opportunities requires capacities and this is the bigger lesson. It is fortunate for Yemen that SMEPS, a local innovator had its capacity built in the years prior to Yemen’s conflict. The World Bank, UNDP, DFID, USAID and the Islamic Development Bank have invested in strengthening SMEPS abilities to get markets working for the poor and their investments are paying dividend. The implication of this, as Green (2016) proposes is that development agencies should support the capacity building of innovators specifically to prepare them to take advantage of powerful events in pursuit of change.