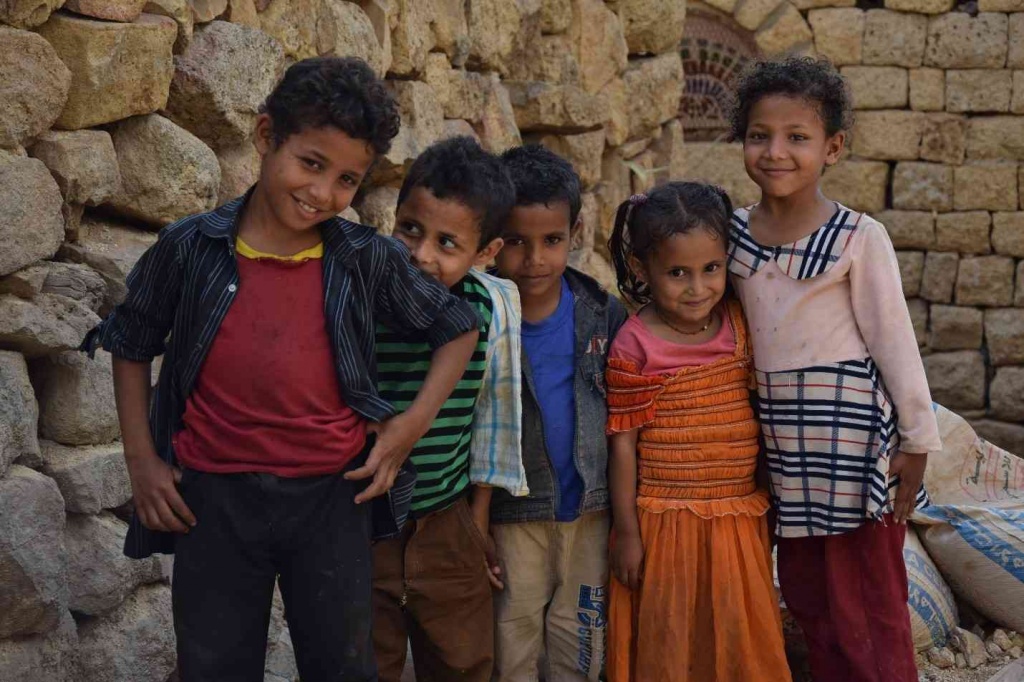 Our destination this time had some kind of human features. I don’t know why I had that feeling. I felt that I wasn’t just about to visit a “place”, but I was rather visiting a person. A person whom I was very excited and eager to meet. A person who is well- educated positive, optimistic, committed, and a decision maker for a better future of Yemen.

There was “Burra”, our destination, with all its trees, mountains and its kind and simple people. There were many mountains ahead, between “Abdul- raqib’s” farm and us, which we had to reach by foot as our car wouldn’t be able to move further up on such rigid and huge rocks. After we stopped the car and started climbing the mountains, we expected that it might take us days to reach Abdulraqib’s house and farm. Mohammed a teen-ager from Burra who was accompanying us was pretty fast compared to us. We realized how faster he was than us due to his daily climbing and descending from this mountain. We were there, behind him running out of breath and dragging our exhausted steps behind us. How fantastic life would be had we lived again in a village and enjoyed the fresh air and the natural exercising. I truly wished to be like Mohammed. He was so fast that he was nearly jumping and hopping while we were making all that tremendous effort with wet sweaty shirts! It is sad, how I was actually walking on my palms and pulling my feet. It is sad how much we have lost in cities from our health and healthy lifestyle.

I suggested we stop and sit down, to take a break before we climb up again aiming at Abdulraqib’s house and farm which seemed like a small olive on the peak of the mountain. While we were taking a break we felt embarrassed observing two young children chasing up and down the mountain as fast as arrows. We stood up and continued climbing up the mountain as if we weren’t extremely tired.

Abdulraqib has a beautiful house which consists of two floors. He met us with a big smile full of warmth and appreciation. He greeted us many times and welcomed us to his house pointing at the window on the second floor where his father who was very old, was. He was there watching us come up with a smile which also said a lot. His children were playing with the goats and chicken and laughing happily. Abdulraqib looked very self-confident although those very clear wrinkles on his forehead and beneath his eyes were a proof of how severe life was on this very high mountain in Burra.

We drank glasses of tea in front of Abdulraqib’s house although he insisted that we would enter, but we preferred to drink the tea across from that beautiful view of the green color in all its degrees. It was amazing. We were surrounded by clouds. We followed the movement of the clouds with our eyes and the clouds seemed to be examining us too! I stood up and filled my lungs with that cool, pure air. We were so high we felt that it was possible to open our arms wide and FLY! Whenever we were quiet enjoying the magical moment Abdulraqib decided it was his duty to entertain us with various jokes and unfortunately they weren’t funny! His neighbor, his kids and we weren’t able to laugh because the jokes were boring so he would greet us all over again instead to make us forget how awkward his jokes were!

NOW it was just about time to do what we actually came to see. It was the process of uprooting “Qat” trees and planting coffee trees instead. It was removing the wrong and implementing the correct. It was preventing negativity and spreading positivity and optimism. It is a day anyone would love to be present on. Abdulraqib made a gesture to his children and neighbors whom he had asked for their support. They came early to help him uproot all those trees of Qat. I observed the reaction on his children’s faces every time he uprooted a Qat tree. I guess that they were surprised. They have always heard that Qat makes farmers earn money, but they all knew it was harmful. Those children figured out the lesson. The lesson was: “Qat trees don’t love us, but Coffee trees love us because they don’t harm us.” Every time Abdulraqib’s neighbors uprooted one of the Qat trees they would laugh at him and ask God to support him after losing his valuable source of income. They told him frankly that he will die after uprooting the Qat trees. He merely smiled at them. Abdulraqib was brave! He replied,” On the contrary! I was dead and only now I feel alive.” After a few hours the land looked completely different. The trees of coffee decorated the land. It changed into a piece of heaven like Abdulraqib described.

I glanced at his kids again. They looked like the coffee trees very beautiful and rich with a promising future. These coffee trees will grow and so will his kids. Now there should be no threats and no worries about hunger. No worries! How much does Abdulraqib value and love his kids? I asked myself. A man who uprooted a tree which lasted for forty years on his land for the sake of his children must be a wonderful father and must love his children a great deal.

After we finished, we played with his kids and took photos with them. They smiled. We left before sunset, although we wanted to stay longer. I looked back after we started going down. The smiles of Abdulraqib’s children were stunning while they were waving to us good-bye. The wind moved the leaves of the coffee trees. They were waving to us good-bye too. We waved back to both Abdulraqib’s children and the coffee trees, leaving them in good hands, and a secured future. These trees will ‪tomorrow be his valuable source of income, that will make his family’s life better. This is what development is all about, continuity.

*This version is translated; original version is written in Arabic by Jamal Taha.