I used to always imagine that I was on the way to the directorate of Al-Abaser in Dhamar governorate, and imaging how the coming hours will be. How will today be and what will this day hold? It is “field day” in this humble region that many people do not know about, many people think it is just a piece of land that is just windy and dry! People in Al-Abaser now call it “Al-Abaser the land of good deeds” Does this mean Al-Abaser changed? I am almost close to see the change with my own eyes; I will finally get to see it!

This is where my trip started. I traveled to be able to attend the field day. To see the success of the farmers after SMEPS intervention, despite the fear of traveling in the insecure situations the country is going through, I was very excited and eager to hear the farmer’s feedback face to face. Field Day is important because we present the change and how it occurred in reality using our farmers who used modern agricultural techniques and the big difference between the flood irrigation and drip irrigation. We are here to compare between what was used and what is used now in farms. The field day is important because it also gives a chance for farmers from all districts nearby to attend and witness the positive change of using modern technology in agriculture. It encourages them to make that shift, after seeing the positive outcomes with their own eyes. The field day shows how life could be so much better. 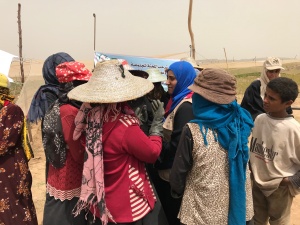 The farmers were surprised with the results and this increased their confidence in modern agriculture technologies, especially in solar power pumps. One solar pump connected up to 20 farmers that benefits from the water reaching them. As analysis shows, using solar power in pumping water saved farmers up to 70% of the cost and expenses associated with pumping. Water consumption also has decreased using drip irrigation’s by 63%.  All this led to an increase in the profit and it is now 5 times higher than previous profit earned.

Honestly, I did not know they will be this happy. They were extremely satisfied and their feelings reached me. At some point during the field day, I felt that I have reached different levels of happiness with its full details!

It was overwhelming to speak to farmers and to hear their thoughts. One of the farmer said:

“The project has brought life back to us and to our land” This sentence he said really touched my heart. It was the most beautiful thing I have heard in a while. Farmers in Al-Abaser were right on the edge of poverty! Farmers told me they were threatened by famine because most of them were forced to leave agriculture since war broke out. Life conditions and circumstances made it almost impossible to survive. They used to come across high fuel prices that they can’t afford. The used to lose so much money and it didn’t cover the costs at all. Whenever I see a farmer’s face speaking about the past and its struggles, I feel extremely sad. That feeling disappeared just when I blinked my eye returning to the “present” moment and the actual reality. “We do not want to return to the past and its sufferings.” said one of the women farmers. This itself is a motivation for us at SMEPS, we wake up every morning to make sure this continues to happen, helping more people. SMEPS aim is to support these people continue living with a sustainable income helping them live a decent life.

The field day came to an end. It was such a beautiful day. It was full of enthusiasm, hope and optimism. Farmers had the chance to talk about their own experiences and achievements. They spoke about the positive impact of this USAID funded project on their income and production. Agriculture engineers also played a major role in the success of this intervention. They support farmers throughout the whole season giving them correct advice’s and guiding them throughout the process. They assisted them to start correct farming practices by helping them protect their farms from diseases and possible threats. The farmer Warda spontaneously expressed her joy by saying “I jumped out of happiness” when she saw the positive results on her farm. Farmer Warda was among the beneficiaries who got supported with modern agriculture techniques that allowed her to return to farming after a long stop. She lost her husband but as a single mum she is now able to provide a decent life for her children.

All of a sudden, another farmer asked to speak. She was in her late 50’s. She spoke loudly and was smiling so wide. She insisted on pointing out the importance of continuing this support and the project because it covered a need they suffered from, and she wants it to reach more people.

She said and I quote:

“You supported us to eat from what we plant, from our own hands not waiting to be fed or dressed”

These beautiful and good spirits that farmers have, their enthusiasm for work and their happiness with the results is just heartwarming. All these details made me proud that I was in charge of this project. I saw the results. The results that made me live these moments of happiness among farmers. I am proud of the whole team, which includes a big team of dedicated men and women, in the fields and at SMEPS office. They worked with sincerity and strength to make this project successful. In the end, I hope such projects sustain to benefit more farmers and create more job opportunities. Al-Abaser now is indeed, the land of good deeds.

*This has been translated by smeps communications, original version is in Arabic written by Rania Al-Mamari